Yes, Lego Ninjago fans, the first ever Lego TV series has begun on Cartoon Network, and it’s all about Ninjago! This TV series has a great storyline of action, adventure, comedy, fun, and most of all… ninjas! In the storyline for this new Lego TV series, Sensei Wu and the ninjas have defeated Lord Garmadon and the skeleton army, retrieved the four Golden Weapons of Spinjitzu, and restored peace to Ninjago… for now. But Lord Garmadon escaped through a portal through time and space to return one day and become powerful enough to posses the power of all four weapons and recreate Ninjago in his image. Now the ninjas face a new threat, an ancient race of snake people with special powers and abilities, the Serpentine.  Also, the ninjas must now put up with Lloyd Garmadon, a spoiled kid who is obsessed with candy and is Lord Garmadon’s son. To make things even worse, there is a mysterious man known as Samurai X, who is helping the ninja defeat the Serpenine. But will this mysterious person betray them to save himself, or will he help them spin their way to Victory? After discovering one of Sensei Wu’s scrolls, they find a prophecy that states that one ninja will rise above the other ninjas and become the Green Ninja, the one destined to defeat Lord Garmadon. Will the ninja defeat the serpentine? Will they discover the identity of Samurai X? Who will be the Green Ninja? All answers will unfold and will be revealed in the new Lego Ninjago TV series at 8/7 central on Cartoon Network! Ninja…. GO! 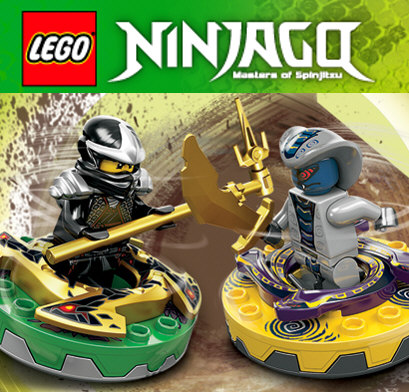